Explore the City with Malte 1: The White Walkers of Kashiwa 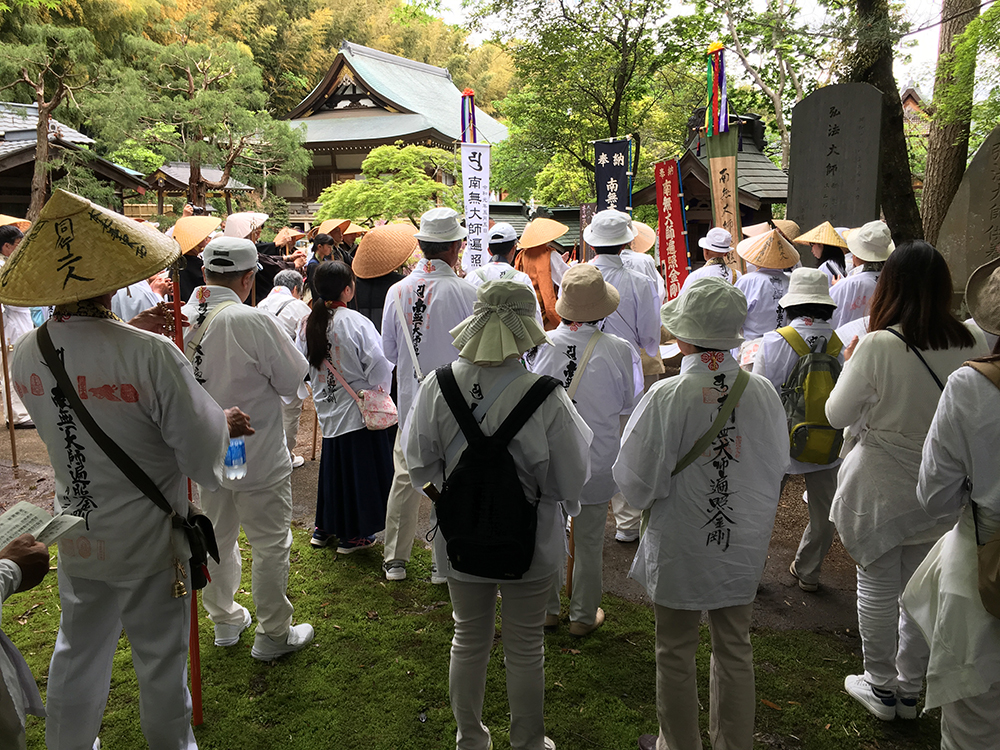 In an over 200-year-long tradition during Japan’s “Golden Week”, in which a number of national holidays line up, people from the Tokatsu Area visit 88 temples in a 5-day pilgrimage. A test of conviction and willpower. For some, it is a religious voyage, for others a way of exercise, but for most people, it is a way to communicate with each other, to have a sense of community and to build and cherish inter-human, and human-nature relationships.

How do you pronounce that?

The official name is a mouthful, and at first, I could never even remember it or speak it out fluently. “Jun Shikoku Hachijuhachikasho Tokatsu Inba Daishi Junpai”. It relates to the fact that the tradition originates in the Shikoku area of Japan. Later, it was adopted in other parts of the country as well. While not held anymore in most other areas, it is well kept alive in the Tokatsu area around Kashiwa. Every year from May 1 to May 5, regular citizens and monks from different Buddhist religions gather up to participate.

On the morning of the first day, all the participants gather at the starting temple (Horinji-Temple in 2019). The goal is to visit 88 temples in total, go full circle and end the pilgrimage back at the first temple. Everyone wears white clothes, first-time participants show up in what white clothes they can organize, from just a white shirt, and sometimes white pants. The more experienced pilgrims wear traditional white Gi (Japanese Jacket), sometimes use walking sticks or “shakujo” (Buddhist ringed staff). As a small side note, if you do not want a possible sunburn, some sort of headgear is highly recommended.

Arriving in a crowd of pilgrims, all dressed in white—about a thousand people gather up to participate in Tokatsu Inba Daishi annually—I feel out of this world. Being removed from the material realm, and put in a fantasy setting. Feeling like a complete outsider as a taller white guy at first, not sure what to do, how to correctly behave, I am guided to the main reception. For a small “1000” yen fee, I receive my own “wagesa” (Buddhist stole) and put it around my neck. A small price to pay to further identify as one of the participants, one of the brave who dares to challenge mind and body on this taxing pilgrimage walk.

Before the actual march begins, the organizers say a few words, followed by the leading monk beginning his chants. Suddenly, everyone chimes in. Most people take out their “Kyohon” (sutra book) from their bags (also mostly white) to read along, some people (surprisingly many) perfectly recite the sutras from memory. The combined voices of the people create a dense aura, lifting your spirits for the coming odyssey. Obviously, I have no idea what everyone is saying, so I just smile, and look around like a fish out of water. A kind elderly woman hands me a bit of “Nihonshu” (Japanese rice wine) in a paper cup, a gesture that makes me immediately feel like part of the congregation.

The start of a journey

It was supposed to rain, but instead, the sky is sapphire-blue and the sun shining, supporting the pilgrims with energy. Remember the part about the headgear? Expecting rain, I have nothing to put on my head. A few hours walking and I perfectly turned red, into a lobster. Marching from one place of worship to the next, reciting the same sutras at every location. Sometimes just wayside shrines, sometimes beautiful and majestic temples. Each stop along the way has its own unique charm, and the chants of the people are continuously fascinating and energy-giving. On the first day, we visit 16 locations, often with more than one place to say prayers and chant. The distances between each spot vary greatly, the shortest being about 80 meters, the longest 2,5 kilometers. At first, I feel like being able to walk forever, but the sun and warm temperature, even though energy giving at first, slowly take their toll. Generous hospitality at each stop (including snacks such as bananas and sweets, soft drinks and, if you want to enjoy some alcoholic beverage even more “nihonshu”), and friendly conversations with fellow travelers keep one moving. Ordinary people kindly greet you, while you walk through Kashiwa’s beautiful nature: the Teganuma lakeside, far-reaching paddy fields, and small forest areas. A rare chance to see stunning temples, you never knew existed in the greater Kashiwa area.

Participating in Tokatsu Inba Daishi is a great way to train your body and soul, to meet new people, see new locations, and experience an old Japanese/ Buddhist tradition first hand. People participate for a variety of reasons. Being a Buddhist is just one of them. More important seems to be engaging with others, enjoying conversation and to strengthening the bond of community. Word of mouth seems to be one of the most important ways of getting people to participate. Following the invite of a friend, or to remember the loving grandmother that used to participate before she passed away are just some of the reasons also younger people participate. I talked to a group of young men from Bhutan. Participating for three of the five days with their boss from work, they find a resemblance to similar traditions in Bhutan, were people sometimes walk around temples for 10 days straight.

Arriving at Hourinnji and starting the march, I expected at least some other foreigners to participate, but apart from the aforementioned, I could not find anyone else, even though foreigners interested in Japanese culture should live in the area (thinking about Bushinkan in Noda City).To be fair, before I joined the Tokatsu Inba Daishi pilgrimage in 2019, I had never heard of such an event in the Kashiwa area, so I am sure a lot of other people haven’t either.A fascinating experience. All the hospitality and friendly greetings one receives during this journey, feeling like part of a big family. It is up to the younger generation to keep traditions like this one alive. The pain and hardship during these 5-days are never experienced alone. A tight sense of community carries one from one temple to the next, teaching important lessons about life as well. Not to give up, and that with consistency, goals will get closer and closer. We live in a world of possibilities, and the only thing limiting our full potential is our mindset.

It was an in interesting experience, to say the least. I am not a very religious person, so the sutras and chants felt really weird in the beginning, not knowing if this they are normal in buddhism. Walking together with everyone and experiencing kind of the same rhythm at every location, I quickly got used to everything and it felt almost like common sense. Arriving at a temple, saying prayers, grabbing some drinks and food, and then starting to socialize. Not knowing any of the regular participants, I thought I would feel alone, but as soon as the first stop, people call me over, put some “nihonshu” and some snacks in my hand. Most of the participants are senior citizens, so you feel like you suddenly gained a lot of grandparents, to look out for you. I won’t lie and say it was an easy march. My legs hurt, and my sunburn was getting worse, especially on my face and arms. Nonetheless, seeing everyone, probably 30 years older than me, keep on walking without any complains, my fighting spirit and competitiveness kicked in. There was simply no way I would surrender to the others and stop walking. So, I just kept walking until the end. Challenge yourself!